Award-winner of the Hollywood Book Festival, bestselling thriller The Torah Codes has been called a Jewish version of The Da Vinci Code.

“FIVE STARS – I wish I could put an additional star on the rating system for this book.” – Roseanne Schmidt, Goodreads.com, July 21, 2011

“FIVE STARS – Let me put this quite baldly: the question before us is not a fictional one. If The Torah Codes describes a real phenomenon, then we are talking about statistical evidence that the scriptures are indeed supernatural–that is to say, holy, inspired by a force with, at the very least, a god’s-eye-view of history. Including, one might presume, future history.” – Ien Nivens, Berkshire Fine Arts, May 23, 2011

A reclusive computer programmer, Nathan Yirmorshy, pounds out ones and zeros in the quiet of his home while his landlord secretly watches from behind a two-way mirror. When an intercepted note connects the landlord to a secret society, and a detective ends up dead, Nathan must abandon his home and everything familiar to him, open his heart to a tarot reader he has never met, and trust her with his life–just as the ancient scriptures have foretold.

An appendix of essays by rabbis, doctors, and physicists discuss the themes of the book, specifically, the Bible codes and the Shekinah, the female aspect of God.

Available in print and ebook. And in audio at Audible.com.

What if you discovered your beloved was on a hit list?

In every generation, 36 righteous must live to prevent the Earth’s complete destruction. When the list of 36 righteous is stolen and turned into a hit list, Nathan Yirmorshy must do all he can to stop the serial killer’s onslaught. Especially since his girlfriend Sophia is on the list.

Included is an appendix of essays and interviews by rabbis and reverends who tackle the question, “Why do bad things happen to good people?”

At first I thought – Jewish thriller? Please! But I was pleasantly surprised. I can honestly say, for someone who doesn’t read this genre often, how involved I became in the story. I was swept along with the chills and action and didn’t even notice how quickly the story moved. The best part was the ending. I won’t give it away, but I thought Ezra wrapped it up well. I would recommend this book to anyone who enjoys the thrill of the chase.” — Carol Malone, author

Available in e-book and print. 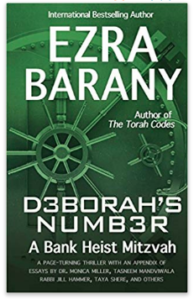 When your beloved is kidnapped by a crazed killer, and you’re trapped in a bank heist, being held hostage is damned inconvenient.

Carl Best’s bucket list has plenty of things he might never do, thanks to being stuck in a Witness Protection Program as a bank teller in Podunk upstate New York. When he is framed for grand larceny, gets beat up in jail, and then becomes a hostage at the bank in a bank heist? Yeah. Those weren’t on his bucket list, either. He was thinking more along the lines of going to New York City to visit the Hall of Science. When he uncovers that the heist has international consequences, and his wife Sarah has been kidnapped by a rogue police officer bent on killing him, he’s convinced someone gave him the wrong bucket list. Now if only there were some way to escape the robbery in time to stop the kidnapper from killing Sarah.

Book 3 in The Torah Codes series, in Deborah’s Number, Ezra Barany presents a bank heist thriller story to keep you up all night.

A rollercoaster ride from start to finish. So much so that I did not stop reading until I finished the book. So happy that I had a few hours free to pamper myself and indulge by reading a story that was fun, and filled with lots of whimsy. I can’t remember when I actually read and completed a book in one sitting. Deborah’s Number kept my interest and curiosity piqued throughout the entire story. The Characters are memorable.” — Mary Van Everbroeck

Deborah’s Number: A Bank Heist Mitzvah (The Torah Codes Book 3) by Ezra Barany is available in e-book and print. 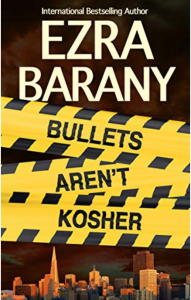 Have you ever woken up wondering where you were, who you were, and why you were wanted for murder?

A man with amnesia is chased by the police for a crime he doesn’t remember committing.

As the evidence piles up against him, he must do all he can to clear his name before admitting to himself that he may be a cold-blooded killer after all.

Ezra Barany presents a kosher crime thriller of amnesia set in San Francisco to keep you up all night guessing.

The mystery surrounding him immediately pulled me in. I just had to uncover the answers about the man as he went from one befuddling ordeal to another. While he desperately wanted to find out who he was to the outside world, it was more important for him to find out who he was to himself. With each page, I worried with Carl…was he a good guy? Or, would it turn out he was the cold-blooded killer he increasingly feared he might be? — Keri K.

Like the other books in The Torah Codes series, and inspired The Sunflower by Elie Wiesel, this novel includes essays reflecting on the Jewish themes of the book.

Written by Ezra Barany, the essays touch on what defines a good person and includes reflections of the Ten Commandments, the Jewish definition of the difference between a good and bad person, redemption, sadism, and how to know if you are a truly good person. An essay on how to be a mensch by Adrienne Gold Davis is included to feed your mind.

Coming soon to other vendors!

Other Books by Ezra Barany

Five of the best writers I ever had the pleasure of working with took my course, “Keys to Building Suspense in Any Genre.”

Impressed by their work, and with their permission, I compiled their gripping suspense stories into one breathtaking book.

“Suspense in six different flavors–all keep you guessing until the twist at the end. For 0.99, a bargain. Can read the whole thing while commuting home. More, Ezra and friends!” — Grumpy was here

Along with these great stories by Kelly Whitley, Christy McKee, Jody E. Lebel, Lila Rain Ekstrom, and Autmn Dove, I’ve included a short story of my own I hope will give you a good chill.-Ezra Barany, Author of the Award-Winning Bestselling Thriller “The Torah Codes”