Ezra Barany has been fascinated by codes and puzzles ever since he was a little tot. He started writing suspense and thriller stories in college and got seriously interested in the Bible codes while attending Aish HaTorah’s Discovery seminar in Jerusalem. The Torah Codes is Ezra’s first novel. Ezra has been a high school physics teacher, fiction writing teacher, songwriting teacher, ESL teacher to French children and pop performer. In his free time, he writes mushy love songs inspired by his wife and book coach Beth Barany. Ezra now lives in the San Francisco Bay Area where he is working on his next book. He is available for presentations and select readings. To inquire about an appearance, please contact Ezra@TheTorahCodes.com.

Born in Oakland, California on September 20th, 1969, Ezra Barany began his writing career winning Honorable Mention for his haiku in 6th grade. Ezra was later inspired by his high school crush and wrote his first song during his sophomore year, “The Prettiest Girl.” His junior year was quite prolific, and with the assistance of Eric Mittler he recorded his first album, Alley Blues. Ezra continued to write lyrics and songs in his junior year but didn’t record his second album, Silent Lover, until his senior year. He also got a poem and short story published in the high school arts zine. Ezra received Honors in English for his work in the high school creative writing class.

After high school, Ezra went to California State University Northridge to study classical composition in September 1987. While there, he joined a creative writing group, Blood and Ink, which published more of his fiction in its zine.

From 1995 to 1996, he lived in Israel with his sister while learning Hebrew. During his stay, he kept a journal that ended up being over 700 typed pages. Ezra then returned to Oakland where he took up odd jobs through a temp agency, and during the evenings sang with the Sacred and Profane Chorus. The Sacred and Profane, conducted by Susan Swerdlow, Ezra’s high school music teacher, performed his arrangement of Maoz Tzur, a traditional Hebrew melody.

By 1998, he volunteered as an English tutor, in preparation for the Peace Corps. Ezra also joined a creative writing group. At the writing group, he met Beth Dora Reisberg and began dating her a few months later. In March, 1999, while on a vacation in France, Ezra proposed to Beth in the gardens of the Chantille Chateau. They married on August 20th, 2000 on a boat in the San Francisco Bay, and again on August 27th in front of all their friends and family. 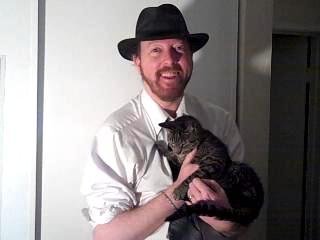 In July 2001, Dafkah Records produced Ezra’s third and first fully orchestrated album, The Strongest Whisper. Ezra and Beth spent two years living near Paris, France and at Paris, they both taught English while practicing their fiction craft in another creative writing group. Ezra’s fourth album, Sacred Seas, was completed early 2005, and marks the coming together between he and his wife. In November of 2005, he took on the challenge to write a novel in one month and wrote The Torah Codes. From 2005 to 2006, Ezra taught classes in fiction writing and physics at Hebrew Academy and at Riordan High School. In March 2009, Ezra took the challenge of creating an album in one month and wrote and recorded the album, Creative Commons; Muse Me.

Ezra is now living in the San Francisco Bay Area, where he is working on his next book.