What Are the Bible Codes?

What Are the Bible Codes? 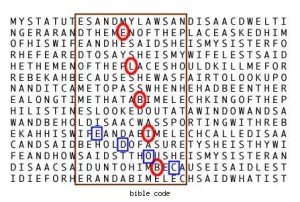 What are the Bible codes? I’m glad you asked. If you read every other letter of the Bible starting with the book of Genesis to Deuteronomy, you get Dan Brown’s novel The Da Vinci Code spelled out. Well, maybe not, but the idea is similar.

There are, in fact, many different kinds of codes in the Bible. One type is called “Atbash” where the first letter of the Hebrew alphabet is replaced with the last letter, and the second letter of the alphabet is replaced with the second to last letter, and so on. This was seen prominently in Jeremiah where it mentions the city of Sheshach. There is no historical record of any city named Sheshach. There are, however, historical records of a place called Babylon, and if you apply the Atbash code to Sheshach, you get Babel, the Hebrew word for Babylon. Perhaps the author of Jeremiah was afraid of being persecuted by naming the actual city.

Other so-called codes are, in my opinion, actually beautiful ways of interpreting the words. For example, gematria is a way of turning the words into numerical equivalents. Reading into the numbers can create clever and wonderful interpretations. In the book of Esther, Esther promises money to Haman. The word for “money” has the same numerical value as the word for “gallows.” So was Esther actually promising a death sentence? Maybe the author intended that subtle innuendo, but maybe not. Either way, the code, intentional or not, gives an intriguing look at the text.

The codes that impress me the most, however, are the equidistant lettering sequences (ELS).

ELS is when a word can be found in the text by skipping every 10 letters, or every 38 letters, or every 3 letters. This sentence holds an ELS. Every fourth letter spells “hen.” Not so impressive on its own. In fact, it wasn’t even intentional. I wrote the sentence and checked to see what word I could come up with, and out popped “hen.” I’ve done this enough to know that finding three-letter words is ridiculously simple. However, once you get into five, six, and seven-letter words, coincidence begins to drop down to intentional rather quickly. Can you imagine finding the name “Ezra Barany” spelled out in this paragraph every seventh letter? That would be stretching coincidence.

Better still, what if I found “Ezra Barany” and “Oakland” (the city of my birth) and “September 20th” (the date of my birth) all encoded as ELSs within one chapter of the Bible? Impossible, unless the author knew I would be born in the future. And yet this is precisely what a careful study found in the book of Genesis. Specifically, the names of over 30 well-known rabbis with their places of birth and their birth or death dates located near their names.

When I say a “careful study,” I mean that they followed the scientific method: observation, a priori hypothesis, experiment, conclusion, and replication. Five peer reviewers examined the statistics and (reluctantly) published the results in Statistical Science journal. The chances of the results happening by accident was something like 1 in 200,000. We are more likely to get hit by an asteroid this year.

To me, the results of this study shows that the author of the book of Genesis knew who would be born and when and where.And that’s the power of the codes. When codes can prove the existence of an all-knowing entity, there is reason to pay attention.

The codes got my attention. I wrote my book because of the phenomenon. I hope the significance of the codes get your attention, too.