Conversation with Dan Brown Author of The Da Vinci Code

Conversation with Dan Brown Author of The Da Vinci Code 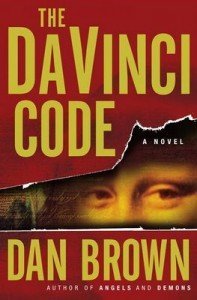 Cleaning my files today, I stumbled across an e-mail correspondence I had with master storyteller Dan Brown before he wrote The Da Vinci Code. He had published Digital Fortress and on his website mentioned how part of his inspiration came from reading an article about a priest. (Possibly an urban legend.)

The priest held a bake sale and was so impressed by the home-baked brownies offered by teenagers at the bake sale, that he took a photo of the brownies and sent out an email to his sister. The problem was that instead of typing “teenagers baked brownies, he accidentally typed “teenagers naked brownies.” Anytime an email has an image accompanied by the words “naked brownies,” a secret government computer is alerted to make sure that no child pornography is going on. You can imagine the priest’s surprise when he was visited by a task force!

Anyhow, that story stuck with me and opened my eyes to Echelon, the place where emails are searched for national security issues.

The correspondence between Dan Brown and I started with an offer for a free bookplate for anyone who deciphered the code on his website. I decoded the cypher and sent the results to the indicated email address. (My pen name was Scissors.)

We are watching you

(Wow! I savored writing each letter!)

Congratulations on breaking the code! Savored writing each letter, eh? 🙂

Since you broke the code, if you’d like me to have Mr. Brown send you a signed/personalized DF bookplate for your copy of the novel, you can email me your snail mail address (which I do not keep) and I will have him send one out to you as soon as he can.

Nice job again on the code.

How’s David? And has Strathmore been treating you well? Anyhow, could you ask Dan Brown if he’s heard of the Bible Codes? And I’m not talking about those bogus codes that have a P=0.9, I’m talking about the Great Sages experiment where a fully refereed test done with an apriori hypothesis, controls, and all that jazz suggested that the Bible was written by someone who knew intricate details about the future. It was published in Statistical Science:

Equidistant Letter Sequences in the Book of Genesis

Abstract. It has been noted that when the Book of Genesis is written as two-dimensional arrays, equidistant letter sequences spelling words with related meanings often appear in close proximity. Quantitave tools for measuring this phenomenon are developed. Randomization analysis shows that the effect is significant at the level of 0.00002. [Ezra’s note: P=0.00002 means that the likelihood of finding those codes — the ones they found in the Book of Genesis — was as coincidental as if I succeeded in picking the solitary Ace of Spades from a deck of 50,000 cards. In other words, the codes must have been intentionally written into Genesis.]

Anyhow, naked brownies just wondering. Could you have naked brownies the personalized bookplate say, “Scissors, ON WITH THE REVOLUTION! As though I were your friend, Dan Brown.”

Some advice: When drinking soda, never burp through your nose.

Dan Brown congratulated me for breaking the code and said that Susan Fletcher forwarded him my letter. He said he hadn’t heard of the Bible Codes or the Great Sages experiment unless it relates to the book, The Bible Code. He asked me to clarify whether what I requested was how I really wanted the bookplate to read.

Yes! You are correct, sir! That is exactly how I want my bookplate to read. And what would be very nice (though not expected) is if you sent along a can of vegetarian soup. I get hungry every so often. You know how it is.

As for the Great Sages Experiment, the book “The Bible Codes” does indeed talk about it but it also mentions a lot of untested codes and sensationalizes the whole thing. I don’t recommend it. The more scientific/objective book about the codes is called “Cracking the Bible Code” by Jeffrey Satinover.

Thank you so much for writing DF. I’m writing a short story now and a small part of it involves the government’s cryptography methods. Your book was not only a page-turner. It was a wealth of information (along with your web-site) condensed into one area. Hopefully I’ll be done with my story before April (in April I’ll be in Eastern Europe–a Russian-speaking country–through the Peace Corps). Perhaps you’d like a copy of the story?

I look forward to receiving the book plate and hope to also receive the can of vegetable soup. Send my regards to Susan.

After letting me know that the bookplate was on its way, Dan Brown cheerfully said he feared the vegetable soup would leak out of the envelope so he wouldn’t be sending me any.

As much as he loved the idea of reading my work, his agent advised him against reading unpublished works to avoid lawsuits. He told me to publish it so that he could read it.

Dan, Captain of the Codes Clad in Cyberspace,

Ah! A challenge! I will indeed try to get the story published so that you may read it. Please do not read the following phrase. “All I’m saying is…” Thank you for not reading the previous phrase as it was a quote from my story and had you read it, a lawsuit would ensue.

Since I won’t send you my story, maybe I’ll send you some vegetable soup. Now how does that sound? You get hungry at times. I know how it is. And maybe your agent would also like some vegetable soup. I’m convinced he would like some. I don’t care what the press says about agents’ digestive tracts, agents get hungry too. I should know. I was hungry once. And then I had a nice can of vegetable soup. And look at me know! I’m winning bookplates! You know, your agent sounds like a great guy. He really does. You should give him a bookplate. I think it would be a nice gesture. I’ll send him the can of vegetable soup, you send him a personalized bookplate, and he can sit in his living room and enjoy reading your book while eating the vegetable soup. Yes. I think he would appreciate that.

Well, Dan, I look forward to receiving the bookplate. Especially since I haven’t a clue what a bookplate is or how it works. My roommate thinks it’s something that heats up your book and keeps your book warm so that you can go to bed with a warm, cozy book.

Thanks for the bookplate! I now know what one is! Wow! Every sentence I’ve written so far has exclamation points after them! How absurd!

As for the lack of vegetable soup in your package, no problem. People don’t always eat vegetable soup. I know how it is. What was I thinking?! I rarely eat soup, much less vegetable soup! The idea of you sending me soup was utterly absurd and ridiculous. I apologize.

Could you send me some popcorn? People always eat popcorn. They eat it in their movie houses, in their living rooms. They eat it in their front porches and outhouses. The eat it when they carry furniture to and fro, when they type newsletters and love letters, when they’re participating in parades with giant, red floats. And they carry popcorn around with them everywhere they go. I like to carry my popcorn next to my beeper. My beeper doesn’t get much use but, boy, do I eat the popcorn!

I look forward to your email reply and I keep my fingers crossed for an attachment of popcorn.

Dan Brown’s email stated that the email was good for a large bag of popcorn should we ever meet face to face.

Thanks Dan for being such a fun email correspondent!